Showing posts from October, 2012
Show all

'War Bonds' show is musical journey through WWII By Timothy Cox Correspondent Sunday, Oct. 28, 2012 On Nov. 9, musical theater enthusiasts will get a chance to sample a 70-year-old piece of Americana during a performance known as War Bonds: The Songs and Letters of World War II.
SPECIAL David zum Brunnen and Serena Ebhardt will bring the songs and letters of the World War II era to the stage. The production is sponsored by Mike Deas of Augusta Amusements Inc., who has a deep interest in big-band, blues and jazz music.

The show features the husband-and-wife team of David zum Brunnen and Serena Ebhardt. The vocalists will be accompanied by their pianist and four musicians from the Augusta Amusements Big Band, Deas said. 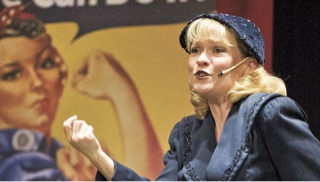 Actors Serena Ebhardt and David zum Brunnen arranged the revue, which opened with a recording of President Franklin Delano Roosevelt’s radio news report of the bombing of Pearl Harbor. Ebhardt and zum Brunnen, accompanied by pianist Greg Dixon, then carried their audience on an energetic, enthusiastic and sometimes emotional journey through the war years. Their innovative history lesson contrasted humorous aspects of the awkwardness of war with its harsh realities through songs and authentic letters from the period.

October 18, 2012
Arts in Education Resources
The A+ Schools Program is the largest, longest running, most successful arts-based whole-school reform effort in the nation. Since 1995, A+ Schools has been using the arts as a catalyst for creating connections and making school engaging, meaningful and enjoyable places to teach and learn. http://aplus-schools.ncdcr.gov
Americans for the Arts – Arts Education Campaign website includes quick facts, highlights from national research, and arts education resource websites. AFTA is the nation's leading nonprofit organization for advancing the arts and arts education. www.americansforthearts.org/public_awareness/artsed_facts
The Arts Education Partnership provides information and communication about current and emerging arts education policies, issues, and activities at the national, state, and local levels. The website landing page will allow you to subscribe to their Arts Ed Digest, a source of national and international arts education communications. www.ae…
Post a Comment
Read more

In One ERA: Study Guide Resources

October 06, 2012
Curious?   The links below relate to what you see "In One ERA and Out The Other" by EbzB Productions. The Authentic History Center http://www.authentichistory.com/

The Inauguration of President Calvin Coolidge in 19251  http://artandhistory.house.gov/highlights.aspx?action=view&intID=229

Wishing all of you well as you begin the 2012/13 season and sell-out performances for each event! With meetings and reviews abounding, I hope you will turn your attention to SERENA EBHARDT and her one woman tour de force contemporary & historical cabaret show, "IN ONE ERA, OUT THE OTHER"!

Serena's passion is manifested in her quest for excellence and education, and her talent for teaching and energy for life and learning is paramount in her craft as an actress and writer.

Everyone working in education will instantly appreciate how Serena weaves the medicine of "education" in a marvelous and unique tribute to our nation and her own beloved country and family. Your audiences will forget their cell phones and game boys and be transported to an on stage YouTube for the mind and soul.............

IN ONE ERA covers iconic Americans from the world of politics, religion, athletics, arts, science, and of course, entertainers from cinema to s…
Post a Comment
Read more

October 04, 2012
We invite you to join us on Saturday, December 8 for "The Night Before Christmas Carol" - a holiday performance for the whole family at the BPAC in beautiful downtown Mocksville!

Join Charles Dickens in his study on Friday the thirteenth, 1843. History, humor and the holiday come to life in this entertaining family play. Renowned Dickens scholar and author, Dr. Elliot Engel, crafts this entertaining study that is suitable for all ages.

Compliment: IN ONE ERA, CAF 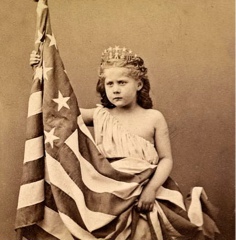 The Program Committee wanted to have strong programs to begin and end our Season and we were right on target with your "In One Era and Out The Other."

We have received many wonderful comments on your performance. One subscriber said he knows he missed some important history facts and would love to see it again. He was very impressed how much history you shared, while singing with your beautiful voice and with the accompaniment of Julie Florin and Drew. We all loved the audience participation. It was truly an outstanding cabaret.

We all enjoyed meeting you and David and your son. Your son is an amazing young man. We enjoyed getting to know you all better at dinner. Bill Colbert, the Chairman for your program, said it was a pleasure to work with you all.

Please keep in touch, we would love for you to return i…
Post a Comment
Read more

It was such a treat having you all with us. Thank you for being the perfect artists in residence. Yes! We'd love to have you back and we'd love to tell the world how great you are. Most important: I think you should feel very proud of what I found from the feedback.

Below are comments collected from our audience after the show...

Serena Ebhardt's narrative on 20th century American History was most accurate and enlightening. She spoke and sang in tones that were most audible.You could understand every word she sang. The pictures she selected to use were most effective. She made me feel that she was talking to me and not a general audience.

The sincerity in Ms. Ebhardt’s voice was so clear. She came off the stage and mingled with the audience. After the show she answered all questions and did not rush anyone off. She gave out Cracker Jacks (that we haven’t seen for years). And, she smiled almost throughout the s…
Post a Comment
Read more
More posts