Showing posts from 2013
Show all

December 11, 2013
David, Your performance was outstanding and enthusiastically received as I hope you gathered from the audience response. You were a pleasure to work with particularly in the less than ideal setting. Thank you for sharing your talent with us. Best wishes for the holidays.

December 03, 2013
At last night's performance of "Night Before Christmas Carol", DzB asked the audience for help in giving a first name to Marley's ghost. The audience responded, "Bob."  First time that's happened in our 15 years of performing the show. 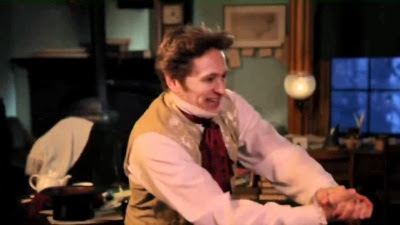 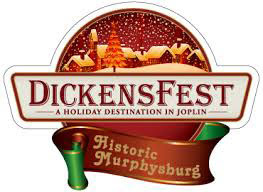 phillipsUpdated: 2013-11-23 08:42:37
Historic Murphysburg Preservation, Inc. will present the fourth annual DickensFest on Friday, Saturday and Sunday, Dec. 13-15, 2013, from 6-8:30 p.m. This event will be centered on Moffet and Sergeant Avenues between Third and Fourth Street in Joplin’s residential historic district. Admission to the festival is complimentary, but donation buckets will be available.
New this year, HMP will present a theatrical play titled,"The Night Before Christmas Carol," a historically accurate and highly humorous holiday production by renowned Dickens scholar, Elliot Engel. It takes place in 1843 on the night that Charles Dickens dreams up his idea for a ghostly little Christmas book that becomes world famous. As he composes his winter morality tale, the audience glimpses into the life of the real Dickens explaining his inspirations. In this acclaimed performance, actor David zum Brunnen portrays Charles Dickens a…
Read more

November 15, 2013
Thoughtful presenters create amazing community experiences.  For the general audience performance of "In One Era" in Kentucky,  the presenter used AP History students as ushers. They also used the performance as an opportunity to honor local music educators from the county. It was an experience that reached far beyond the show, itself.   Thank you, KY!
Read more

Thank you very much for the comments and for the great performance.  You guys were a pleasure to work with.  I will be sure to check out your other work.

In One Era and Out The Other: High Point Area Arts Council, September 27, 2013

September 07, 2013
Dinner Theatre
In One Era and Out The Other: A Patriotic History of the United States from 1901-2001
The High Point Area Arts Council will present In One ERA and Out The Other on Friday, September 27, in the dinner theatre at the Centennial Station Arts Center, 121 S. Centennial Street, High Point. In One ERA and Out The Other is a history of 20th century America told through a patriotic, broad-spectrum prism. "ERA" is a fast-paced musical cabaret filled with multi-media images  from 1901 - 2001. Culminating with the September 11, 2001 attack on America, the show refocuses the future with humor and hope.


War Bonds: The Songs and Letters of WWII
Join us for a musical journey through a way that redefined the world. This multimedia living history cabaret is interspersed with personal letters from the front and headline news of the period.  Travel back to a time when blackouts and rationing were a small sacrifice in order to obtain freedom.  Featuring 22 spirit-stirring tunes of the day and plenty of actual veterans' stories. A warm reminiscence and a harrowing reminder of a time when the whole world seemed upside down.
Adults $25         Students & Seniors  $23
Sunday, September 15, 2013 @ 4:00 PM 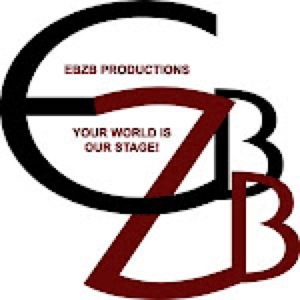 EbzB Productions is looking forward to seeing you this Saturday at United Arts Council's 2013 Cultural Arts Booking Fair!  Please visit our booth to discover how we may enhance your school's cultural life.

EbzB is a professional touring theatre.  Our teaching artists develop works to promote integrity, self-discovery and positive transformation of
artists, audiences, individuals, and communities. We have offerings available for all grade levels which include direct connections to Common Core North Carolina Standards.  Visit our website for previews of our work: www.ebzb.org. 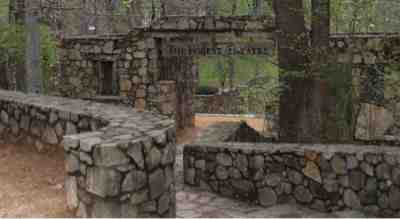 Serena Ebhardt and David zum Brunnen celebrate 25 years of marriage  and 27 years of performing arts collaboration. The duo were married in 1988  at The Forest Theatre on the University of North Carolina campus in Chapel Hill. Over 300 people attended the ceremony. A reception was held at the Carolina Inn where guests danced to Big Band music provided by Rodney Marsh.
The couple began their courtship in 1986 while performing in a production of "Lysistrata." They formed EbzB Productions in 1998.  www.ebzb.org.

May 15, 2013
EbzB Productions and Mike Wiley Productions  ‘Life is So Good’ now playing at The Renaissance Center | Columbia Daily Herald

‘Life is So Good’ now playing at The Renaissance Center in Tennessee.
Courtesy photo

Bill Oakley in rehearsal for “Life is So Good,” playing at The Renaissance Center’s Gaslight Theatre through May 24. Oakley is cast as George Dawson, a slave’s grandson who learned to read at age 98.


DICKSON — The Gaslight Dinner Theatre at The Renaissance Center will present the Tennessee premiere of “Life is So Good,” a moving and inspirational true story of George Dawson, a slave’s grandson who learned to read at age 98.
Based on the book, “Life is So Good: One Man’s Extraordinary Journey Through the 20th Century and How He Learned to Read at Age 98,” written by Dawson and school teacher Richard Glaubman, the play offers an unforgettable account of Dawson’s life view of the world, with valuable lessons and insights into humanity, history, hardships and happiness.
F…
Read more

May 07, 2013
Hello Serena,
This is Becky Finger, the Guilford County Schools Building Bridges grant evaluator.  I met you Saturday in Chapel Hill.
I so appreciate your work.  Teachers did also.  Your performances were the highest ranking presentations for both Friday and Saturday.  Overwhelming, teachers mentioned your presentations as favorites and as ideas they will transfer into their own classrooms.  Many are asking that funds be made available for you to make presentations in their schools.  What a hit!  You inspired so many and modeled such powerful teaching tools.  You and Mike are to be congratulated.
All the best,
Rebecca Finger, Grant Evaluator Guilford County, NC
Read more

May 03, 2013
"LIFE IS SO GOOD" PART OF THE RENAISSANCE CENTER'S "CIVIL RIGHTS AND INCLUSION" THEME | Tennessee Department of Tourist Development News Bureau

"LIFE IS SO GOOD" PART OF THE RENAISSANCE CENTER'S "CIVIL RIGHTS AND INCLUSION" THEMEApr 30 2013Dickson DICKSON, Tenn. – Performances for the Tennessee premiere of “Life is So Good,” a moving and inspirational true story of George Dawson, will take place May 2-24 at The Renaissance Center.
Based on the book, “Life Is So Good: One Man's Extraordinary Journey through the 20th Century and How he Learned to Read at Age 98,” written by George Dawson, a slave’s grandson who learned to read at 98 years old, and school teacher Richard Glaubman, the play offers an unforgettable account of Dawson’s view of the world with valuable lessons and insights into humanity, history, hardships and happiness. From segregation and civil rights to wars, presidents and defining moments in history, Dawson ref…
Read more

Arts In Education - To Be: United

The documentation of a residency for Chowan Middle School by the teaching artists of EbzB Productions.
Made possible by a grant from the Arts of the Albemarle.  http://www.artsaoa.com/
May 9, 2013.
Read more

Compliment: In One ERA

Thank you again for the 3 superb performances of "In One Era and Out the Other." I was impressed with the fast pace and high energy of the show and the fact that it was steady throughout all three performances in the same day. WOW! Facts and history can sometimes be boring, but certainly not in this show! The variety and selection of visuals along with the dynamics of the music and the tremendous voice of Serena Ebhardt drew in the audience making them want more. The play on words, the humorous, the fun, the famous, the sad and the tragic were all presented like the kaleidoscope that is our history. I felt like I was watching and listening to an up-to-minute broadcast of a hundred years of history as it was happening.

The JROTC instructor, Major Beaulieu, whom you met, asked his 22 cadets how they liked the show--thumbs up, thumbs down or thumbs sideways. He got 22 thumbs up. I'm sure the patriotic overtones of the show also struck a chord with…
Post a Comment
Read more

April 17, 2013
While teaching student workshops this week and enabling classes to create a play called "The Timeline of Aviation," a student approached me. He looked angry and sad. He told me that he didn't like learning about the Enola Gay airplane because it had been used to drop bombs on Japan. His family is Japanese. He is 9 years old.

I searched for something, anything to heal the moment.

I said, "I think I understand how you feel. Do you know that my family is from Germany? We were considered enemies and called Nazis by Americans during the same war. I don't like that either. But my hope is, that in teaching you how the invention of the airplane has been put to use in the past, that you will understand how it might be used to heal the future. We must now work together as one to heal."

"Do you understand what I mean?"

He nodded his head, but continued to look unsettled. He squeezed my hand. I squeezed back. We parted. I hoped.

In One ERA and Out The Other 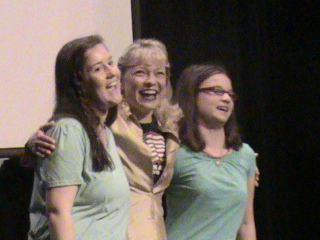 Having fun with my friends who stand by me in the student matinee of "In One ERA."

Compliment From The Playwright To The Director 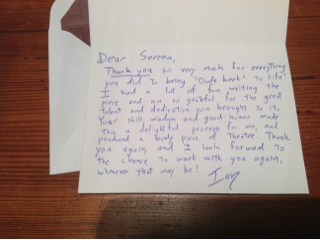 Thank you so very much for everything you did to bring "Oude Kerk" to life! I had a lot of fun writing the piece and am so grateful for the great talent and dedication you brought to it. Your skill, wisdom, and good humor made this a delightful process for me, and produced a lovely piece of theater. Thank you, again, and I look forward to the chance to work with you again, whenever that may be.

The Daily Tar Heel :: Plays to be performed in Ackland for 'Activated Art' series

April 05, 2013
The Daily Tar Heel :: Plays to be performed in Ackland for 'Activated Art' series

The Interior of the Oude Kerk by Ian Finley, directed by Serena Ebhardt of EbzB Productions
Post a Comment
Read more

In One ERA - Pop Quiz

Take it and see how much you know about AP US History!
The answers can be found in EbzB Productions' "In One ERA and Out The Other."

Activated Art at the Ackland

Activated Art at the Ackland

By popular demand, the Ackland Art Museum at The University of North Carolina at Chapel Hill is again presenting "ekphrastic theater" in its galleries. Through an upcoming series of live theater performances entitled ACTIVATED ART, works of art in the Ackland’s permanent collection may be experienced in unexpected and thought-provoking ways.

Ekphrasis is a rhetorical device in which one artistic medium attempts to define the essence of another, giving a work further life by telling its perceived story. Each performance of ACTIVATED ART comprises five ten-minute plays, each inspired by a different work of art in the Ackland Art Museum’s permanent collection.