Showing posts from June, 2019
Show all

War Bonds. Why We Do It.

Dear EBZB Productions:
It is Monday morning, and I'm still thinking about the “War Bonds” play we saw Saturday night at the Pal Theater. It was great, and I have a number of areas of thanks I want to cover with you.
First, thank you for the entertainment you provided. Cheryl and I have become set in a routine that usually involves a TV screen and some sort of snack on Saturday nights. You provided us with an opportunity to get out of the house and do something productive with our minds and bodies. It was refreshing.
Second, thank you for the content of the play. Those who fought in WWII are often referred to as “the greatest generation", and it is a title that they rightly earned. To think that millions of men and women put down their plows and picked up their arms to defend this country after not one, but three nations declared war with us is amazing. I do not feel we can muster that kind of patriotism among our draftable youth today. The sa…
Post a Comment
Read more 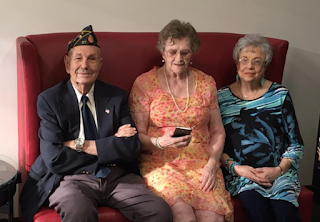 War Bonds: The Songs and Letters of World War II

June 07, 2019
So delighted to keep company with Fred and Becky Story of Concentrix Music.  Fred composed the original music used in the public broadcast production of EbzB's War Bonds: The Songs and Letters of World War II.  See what they are up to now...