Showing posts from January, 2011
Show all

Listen Now! The New New South on THE STATE OF THINGS, WUNC

Serena Ebhardt on THE STATE OF THINGS

Meet the New, New South, Part II Tuesday, January 25 2011 by Amber Nimocks, Frank Stasio, and WFAE | Send to a friend
International Civil Rights Museum, downtowngreensboro.org
Meet the New New South: In the past decade, 1.5 million new residents have moved to North Carolina, a trend that is echoed across the region. As demographics and economic forces change, the South changes with them. WFAE and WUNC began an on-air conversation last summer about the New New South. We continue that conversation, as hosts Mike Collins of “Charlotte Talks” and Frank Stasio of “The State of Things” talk with guests about food, theater and cultural tourism in a special joint broadcast. Joining the program are Michael D. Harris, curator of the Harvey B. Gantt Center for African-American Art & Culture in Charlotte; Margo Knight Metzger, public relations director for the N.C. Department of Commerce’s Div…
Read more

January 24, 2011
Richard Glaubman introduces 'Life Is So Good'
Jason Johnson A&E Editor
Author Richard Glaubman was in Troy last week to see the production of "Life Is So Good," a play based off of his book by the same title that tells the story of 103-year-old Texas Native George Dawson.
The book and the play tell the story of Dawson's remarkable life, showing the changing times of past century through his eyes.
Glaubman met with Dawson after he read an article about him learning to read after 98 years of being illiterate.
After meeting him they formed a friendship.
"I realized pretty early on that Dawson had a remarkable memory," said Glaubman. "The stories didn't come out for a good while though. Not until we became friends and I had been staying with him at his house."
Glaubman was here in Troy to give a series of lectures on the writing of his book and to give some tips on creative writing in general.
Before the play, which happened …
Read more 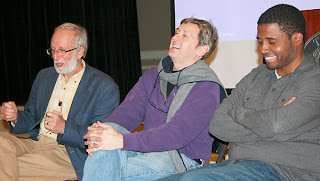 The two men had nothing in common.

But George Dawson needed to tell his story and Richard Glaubman needed to listen.

As Dawson talked and Glaubman listened, both of their worlds were changed.
Dawson was an African-American living an obscure life in South Dallas. Glaubman was a teacher and writer living comfortably in Seattle.

Odds of the two ever meeting were astronomical and a meeting would never have happened except for a newspaper article that caught Glaubman’s eye and tugged at his heart.

The article told the story of Dawson, who at age 98 had learned to read.
For some reason, the story captured Glaubman’s interest and he was soon on a plane bound for Dallas to meet Dawson.

“I’m not sure what compelled me to get on a plane to talk to an old man that I didn’t know,” Glaubman told those who attended his lectures at Troy University Thursday. “But sometimes you just know when the time is right.”

The first meeting was a bit uncomfortable for Gl…
Read more

Life Is So Good: Isothermal College