“With the 75th anniversary of the Invasion of Normandy just last month, it seems appropriate to pay tribute to World War II veterans as part of our season,” said Jim McLaughlin, booking agent for the Zanesville Concert Association.

War Bonds explores the dark side of war and the dynamic association with the lighthearted popular tunes of the time. Songs of the period lift the mood, even as the performers describe the atrocities of war. The family show allows the Greatest Generation to celebrate, while the next great generation contemplates. “We’re known for our authenticity in our work,” zum Brunnen, said. “The moments with the local stories are probably some of the most authentic,” as letters and stories from community members are being sought for the show.
According to the Friends of the National World War II Memorial, recognition of the 75th anniversary of World War II began in 2016 and runs through 2020, the length of the event that took place from 1941 through 1945. The performance will celebrate the triumph of the human spirit during that incredibly challenging time.

“It’s remarkable to look back and see now some of the circumstances that evolved into conflict then starting to mirror what we’re seeing hints of now,” explained zum Brunnen. “And, to see how the call was answered to ultimately serve as one voice, even though there were divisions within our country then as well,” pausing he added, “The lessons abound for us all.”

In fact, the War Bonds show will be presented to nearly 1,000 fourth-grade students on the Monday following the show as the Zanesville Concert Association’s annual children’s concert. EbzB Productions, producer for the show, has educator resources for the show on its website  (www.ebzb.org/war-bonds-the-songs-and/index.html). Families are encouraged to review the materials to spur discussion with their children and grandchildren. “Whether you are an educator or a parent, we encourage you to engage your children in this important history lesson through the performing arts,” McLaughlin said. “Since children are admitted free, we hope families will attend to experience the arts at this multi-media show.”

“Over the years it’s been intriguing to see how youth immediately relate to the performance,” zum Brunnen said. “Many of the young audience members have relatives – some very close relatives in the immediate family household serving overseas.”

The stories told in the show are similar to the experiences of military families today. “Those from older generations will be heartened to know the young audiences really enjoy the music,” zum Brunnen added. “And, students are surprised to hear the music they listen to today has its roots in the music of the 1930s and 1940s.”

EbzB Productions is seeking local letters that were sent to, or from, family members during World War II for inclusion in the Oct. 27 and 28 performances. There are no preferred types of letters being sought, zum Brunnen stressed. “The simplicity and genuine nature in which the thoughts and feelings are expressed can be deeply meaningful and enlightening into what was going on at that time. The level of sacrifice then is humbling to reflect upon.”

Including local veterans’ experiences, or those of their relatives on the home front, enhances the performance. “The connection becomes a little deeper and closer to home when there’s a memory or a note from someone in your own community,” zum Brunnen said. “The stories we tell are like those who are experiencing very much the same things that those who are serving in our military have experienced today,” he explained.

Those who have letters that were sent to or from family members during World War II, and who are willing to share them, are encouraged to contact Jim McLaughlin at j.l.mclaughlin@att.net or Ann Combs at the Muskingum County Senior Center at 740.454.9761 or via email at amcombs@muskingumcounty.org. You may also email zanesvilleconcert@gmail.com. 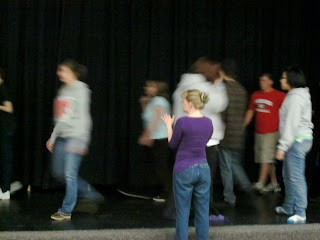